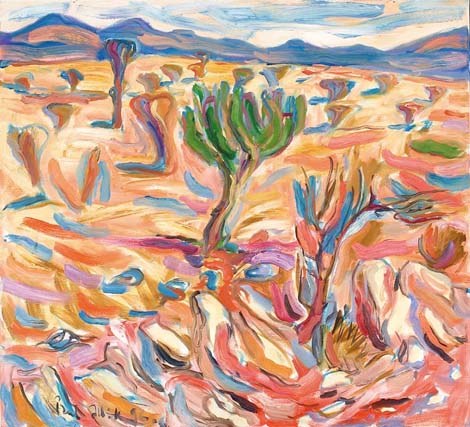 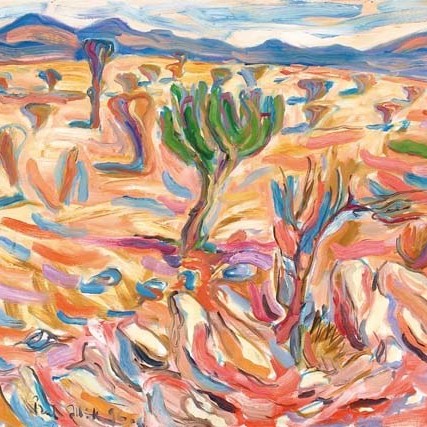 Paul Allik is a rare example in the modern Estonian art history. Allik, having received his initial education in Tartu Art School, did not penetrate into the core of avant-garde immediately in 1960ies while starting with his exhibitions. A certain saucy diffidence towards the graduates of the Tartu school, prevailing in the art world of that period, directed Allik to totally different paths while comparing with “the art of Tallinn”. But just so, by consistently walking along his own path, Allik still developed into one of the most significant painters of the 1980ies and 1990ies. While doing things his own way, an important role was played by a legendary anchoret, one of the most significat post-war bearers of the “Pallas” values, Alfred Kongo. Kongo, whose certain positioning was difficult, was in his creation very stubborn, working in exactly such manner as his heart told him to, not following fashion trends. It is Kongo, from who Allik received his brilliant skill to control colours, which in a paradox manner enabled him to scatter them in his later creation onto the canvas in a very different manner. When Kongo’s colours are controlled in an emphasized manner, then Allik is cheerful, even dissipating. His colours are from another edge of the palette – happy, optimistic, extending of the space experience. He was called in a justified manner “a painter with a sensitive and light hand”, furthermore – in Allik was seen a painter par excellence. Really, when in the 1990ies, when the novelty of painting became under question, it was Allik, who continued with unshakeable serenity walking on his personal path.
Being an artist is his real essence. Allik moved peacefully in different spheres of painting: from the portraits of the 1970ies he reached the expressionism of the 1980ies and from there on to the painting of the 1990ies, which included traits of abstractionism. None of his works express pretence, following of models, the will to settle down in a certain trend. He always remained himself.
It is somewhat remarkable that Allik stayed on the foreground in the 1990ies. Allik, who had always emphasized the classical values of painting – colour, composing of light and space – did not match the mood of the era. But still. It was mid-1990ies, when Allik was asked to participate in a number of exhibitions, in 1994 he received the annual prize of painting – Allik was undoubtedly in his top shape. Two years later the artist decided to continue old traditions and headed with his painting-box … for Africa. While travelling among other countries also in Namibia, Allik was a real author of the beginning of the century: he sat down where the view charmed his artist’s eye the most. After finishing of the preliminary work, during the final painting process, Allik was like Mägi at Saaremaa: light, quick, improvisational, free. This was obvious while looking at works by Allik: a lot of air and space, no signs of limitations. The horizon has been pushed into the distance, leaving room for the multi-coloured African nature. The brush is moving rapidly both on the canvas and the palette, the abundance of colours is organised but playful. Allik undoubtedly is making use of all painting possibilities. We may be quite convinced: while painting in Africa, Allik was at the peak of both his abilities and creative freedom.