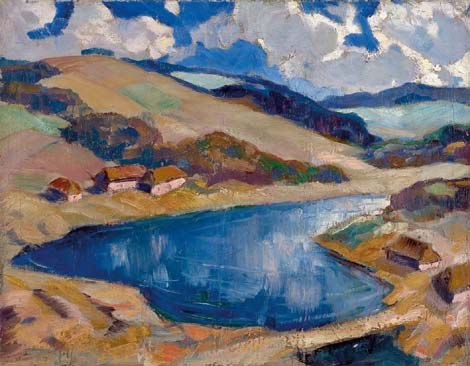 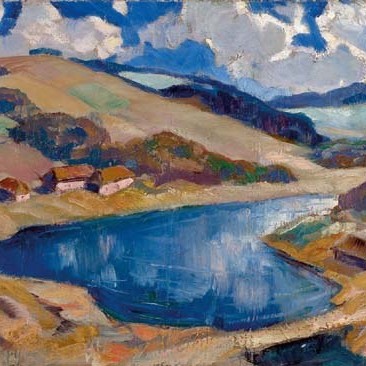 By the year 1927 Peet Aren had reached his creational prime. He had received his education typically to the beginning of the century in St.Petersburg, Vienna and Munich. Many years of imprisonment, release from the prison and return to homeland remained in the war years. Already in the 1920ies, Aren was asked to work as a lecturer and during the accomplishment of “Maastik” the artist worked in the only possible place for him – in “Pallas”. By the year 1927 Aren was referred to as “a famous man”, “a widely recognised artist” and “the backbone of exhibition” (Rasmus Kangro-Pool, Hanno Kompus). In the same year Aren starts to fulfill the biggest order in Estonia ever, an eight-metre long mural painting in the Baltic station. We can claim that in 1927 he was at his creational peak. And really – also according to art scientists Aren’s “painting peak was the 1920ies” (Hilja Jõgi). The first half of the decade was spent on expressionism, deformation and anxious feelings. “Maastik” in its turn is an elaborate and unexpected counterbalance of the beforementioned. In the course of restoring and thorough inquiring of the work was found out that under “Maastik” is as a base painting a figure of a man riding on a horse. But Aren, who was well-known because of his thorough attitude, was discontented with the work, he decisded to try again, to test with the subject and approach, which were the closest to his heart. While being aware of the extremely few existing pieces of art of Aren’s earlier creation, we may claim that this is a real rarity. Also in the general picture of works of the 1920ies “Maastk” is rare because of its subject. While talking of this period, besides the expressionist creation of the beginning of the decade are also mentioned still-lives, but also views of Tartu and figural compositions.
In “Maastik” has receded Aren’s earlier angular and vehement approach, giving way to an extremely joyful landscape. Through the refined choice of colours, Aren has achieved a remarkable result also while taking into account the grand tradition of the Estonian landscape painting. When the charm of landscape paintings by Konrad Mägi proceeded from the freedom of improvisation, rendering of the clamour of colours by the means of short nervous brush strikes, then Aren is considerably more sophisticated, the brush is moving in the hand of Aren, who is standing on a hill, with moderate peace, with long strikes, smoothly. The colours are given in “Maastik” as large areas, but none of them starts to dominate on others’ account. Matching of different areas, at the same time not forgetting organising of the room, which would increase expressiveness, is a clear evidence that Aren has just sat on a hill and done, what he could do best – and that was painting.