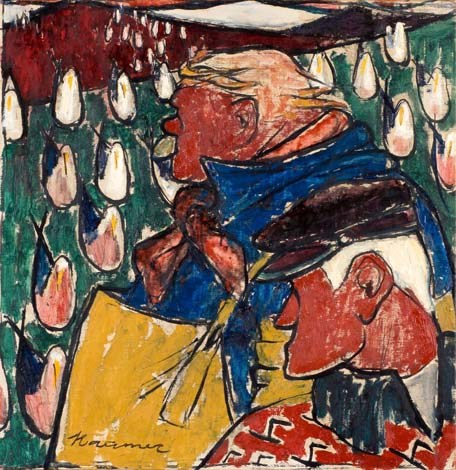 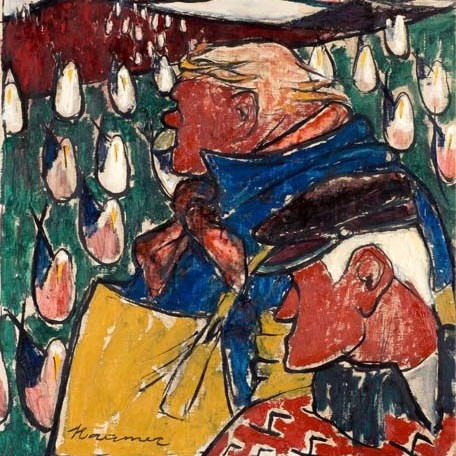 Eerik Haamer is undoubtedly an author, whose creation never started to follow outer requirements. What again and again glows through in his works, was most probably a heritage from home: an undeniable attachment towards fishermen’s life and deep respect towards their remaining true to themselves. Already while studying in “Pallas” during the first half of the 1930ies, Haamer, originally coming from Saaremaa, exposed at the students’ works exhibition his works of fishermen of his native island. After the graduation Haamer became famous and he still is famous with his works depicting the life of the coastal people of Saaremaa and Ruhnu. Also after his forced leave in 1944 for Sweden Haamer continued with his favourite theme and even published some short stories of fishermen.
“Mehed kajakatega” was made directly before a turn in Haamer’s creation. This is the work, which continues the line, which started in 1930ies both by the theme and emphasis, as while being a painter, Haamer never concentrated only upon a true-to-life depiction of the reality. There have been references to Haamer’s brilliant vision of colours, which he has commented approximately in this manner that the best colours do really come from life itself. Well-tanned fishermen, dark crests, white seagulls, bright clothes, bleached hair. Seems to be simple? But still, in order to grasp it, one has to be Eerik Haamer.