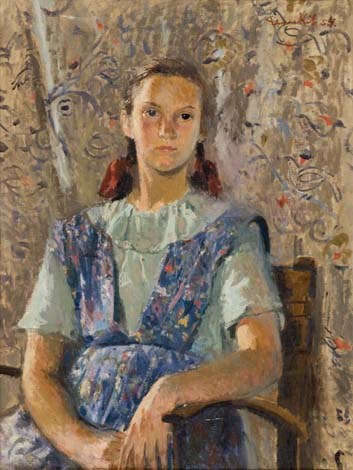 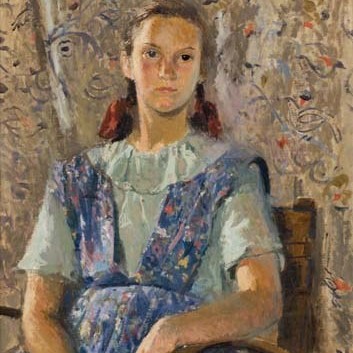 The dedicated artist’s career of Elmar Kits is undoubtedly eye striking. The way a mason’s son became one of the engines of the art renewals of the 20.century, can from one hand be explained by a brilliant education of “Pallas”, after the graduation of which he was announced to be together with Lepo Mikko and Endel Kõks one of the most significant young artists of the 1930ies. From another hand, there has to be something else about Kits, a deep and inflexible desire for art, which made him work feverishly even in his sickbed. Such continuous working allowed Kits to move between different genres, from classical landscape painting to really abstract works, which in their time meant a turn in the local art history.
Therefore it is no wonder that Kits often turned with the means of painting also to those people, who where for him of the greatest significance. This young lady ’s portrait belongs among these works from the 1950ies, where Kits repeatedly depicted his children as well as the children of family- friends. It is true that the first half of that decade knew Kits in the first range as a portrait painter, who painted mainly cultural workers and the intellectuals. But children’s portraits are a chapter of its own. There seems no need to say that the artist’s diligence, cordiality and dedication in these cases were extraordinary.
Accusations, which he faced that time upon the Soviet rules, were therefore completely correct. Yes, Kits was an individualist, he played as he pleased with forms and colours and yes, he stayed also during that time on the positions of fighting impressionism.