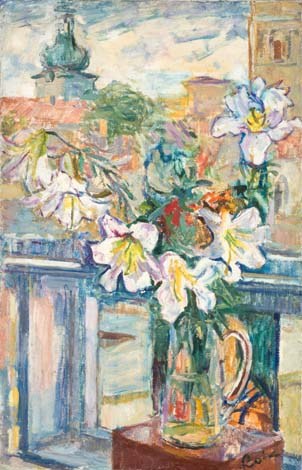 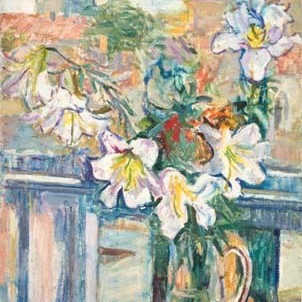 Valerian Loik started art studies already at the age of 16 in the year 1920, which was soon followed by an 11-year education period in “Pallas”. Even though he graduated from the school in the year 1935, it was followed by a forced pause and only in the year 1950 Loik again starts to deal with art. It is followed by decades of a lecturer’s career, the peak of which is a professor’s position in the State Art Institute. Already while studying in “Pallas”, Loik struck the eye with his diversity. He was able to move among portraits, landscapes, interiors and still-lives. It is also noticed that also Loik spent some time in Paris, but differently from other authors he did not concentrate there so much on complementing of his colour experience, but on achieving of strong drawing basis.
“Lilled aknal” originates from the artist’s highly valued period of the 1960ies. And here again Loik expresses his diversity, combining a classical view of the towers of the old city and a still life. In the stressed position are of course the flowers, but their colour solution and light-related issues have been emphasized in such a manner that they also coincide with the sky and water in the vase.