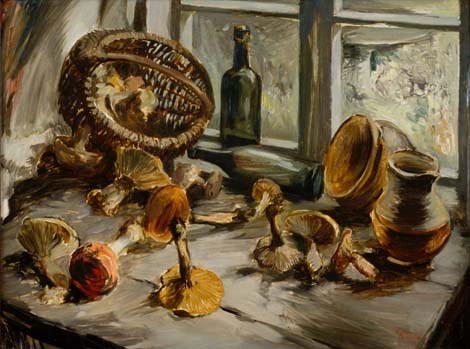 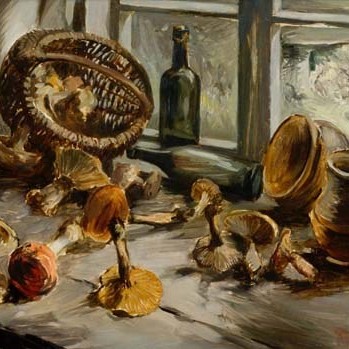 Richard Uutmaa’s work „Natüürmort seentega” is a discovery. Uutmaa is found in the art history still and first of all thanks to his sea theme, which he has depicted in endless variations again and again and has this way achieved outstanding results. Already in 1935, graduating from “Pallas”, he depicted fishermen, later also coastal life, the sea, fishing, stormy sea, log rafting, quiet sea. Together with Eerik Haamer he was in the 1930ies the first and the most deeply absorbed author, handling the coastal life theme. His works of other genres are known, especially his later still-lives with flowers, but they are very few in numbers. As it is known that each pre-war Uutmaa is a rarity, then a work of such size and such theme is already a discovery. It is obvious that Uutmaa, being at his creative prime, has not just painted things he sees. Yes, at that period he often worked from nature, but here Uutmaa has obviously set the composition and has filled the painting equally with different forms. His colour pallet is scanty, but its use is due to it even more thrilling. All possible shades of brown of the mushrooms, green of the bottles and the greyish colour of the windows is an integer, the acquiring of which calls for a very sensible hand. For instance that kind of hand Richard Uutmaa possesses.