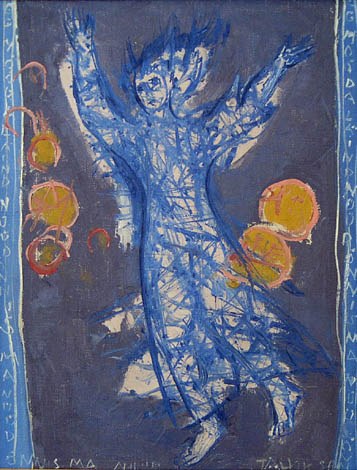 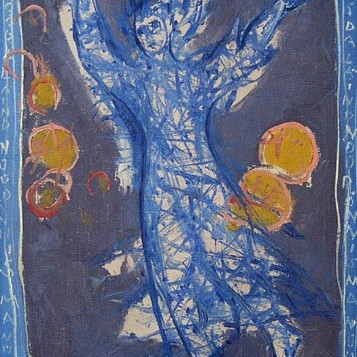 By today to Estonia have not arrived too many examples of the creation by Herman Talvik. Still the local art historians have been permanently interested in his works and have done so even during the period, when it was known that Talvik couldn’t be visited in the nearest future. But even if it had been possible to leave for Sweden and to visit the painter who had left during the wartime, it would not have been so very easy. Talvik lived an eremitic life in woods and was absorbed only in the thing, which matter him most: the art. He was a hermit, who printed graphical art and rarely made some oil paintings. As a rule they are not large-format ones, but the denser they are.
In his works Talvik concentrates on topics, which no one in the 1970ies and 80ies especially dared to touch. Talvik brings into his works angels, does it in an unconcealed and unashamed manner, but not for the angels themselves, but for the messages they carry. These are not strictly religious heroes, but still signs from something more. Talvik, living an eremitic and single life, has understood the triviality of everyday bustle. An angel entering his painting therefore seems to be a sign through which to announce of the gathered thoughts. And who would be more suitable to render a thought that finally in these conditions and just now I feel blessed.