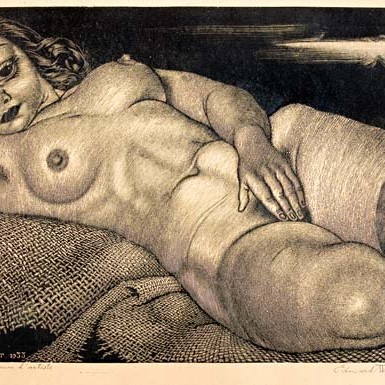 “Lamav akt kanepiriidel” (”A lying nude on a hemp cloth) and “Absindijoojad” (”Absinth drinkers”) originate from Wiiralt’s wilder period. Women are here not fragile creatures any more - they are provoking and openly erotic. They do not smell flowers any more, instead they drink absinth – the core of visions. But surprisingly Wiiralt does not lose his technical skills - on the contrary, this develops and reaches in its style perfectness. Both framing and line handling are extraordinary, but at the same time Wiiralt never underestimates the importance of drawing. Extraordinary creatures, unearthly situations and really strange moods have from now on overtaken his works.