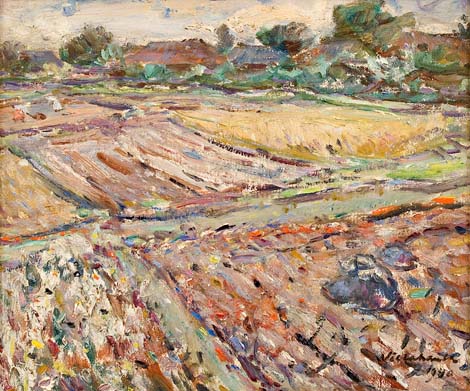 If we had an imaginary interview with works by Johannes Võerahansu, it might be the following. Question from one party: why again Saaremaa? why isn’t it the ailing nature of the island, but landscape, which is laughing and bathing in light? where have you seen such light at Saaremaa? and why aren’t you depicting dramatic events, but grain stooks, haycocks, fields? And the answer from the other party: because Saaremaa has become a part of me, while working there I feel myself well and happy. The nature of Saaremaa is exactly like it has been depicted, one just has to have the skill to see – I have added nothing, I have rather left something out. The whole Saaremaa is filled with such a joyful light. And especially during the times, when it is very hard, when there are the 1940ies and other problems – exactly then I know nothing more important than the high sky and grain stooks, haycocks and fields …