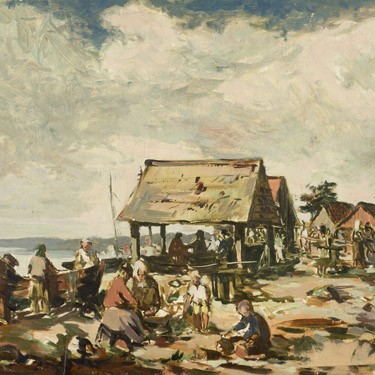 Richard Uutmaa may without doubts be regarded the artist, who has most of all and deepest of all handled the sea theme in the Estonian art. His range covers from seascapes to the life of fishermen, but next to it can also be found more down-to-earth themes. Still, Uutmaa always remains connected with nature, depicting mostly man’s trails in nature. So for example the work “Seened” (“Mushrooms”) of the present auction is telling us of the ways man uses nature, at the same time “Lõikuskuu maastik” (“Landscape in August”) depicts the land which has been cultivated by man. The manner by which Uutmaa joins Pallas-style high artistic principles and farmers’ simplicity is elegant and charming. “Kaluriküla” continues the theme, which was started already a decade ago, where Uutmaa depicts fishermen’s families, who are sitting either in a harbour or at sea. He introduces in the picture simultaneously fishermen and the sea, their feeder, joining both of them together in a harmonious manner. Here the work motif does not seem to be exerted and artificial, but on the contrary it is simple and natural. He sees in romantic lights working people, who are feeding their families despite all hardships, also the unpredictable sea.