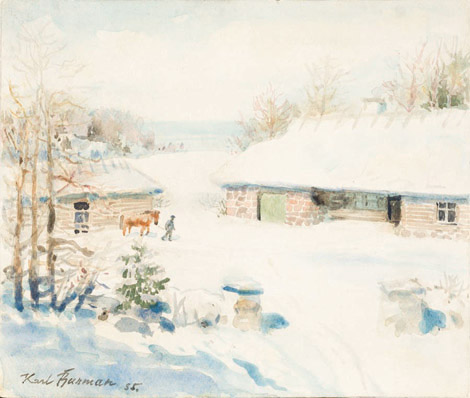 Karl Burman’s “Talvine taluõu” is partially connected with his “Kündjad” (“Ploughmen”), depicting similarly a traditional farmhouse during mid-1950ies. Burman uses thrillingly the side-screen method, which has already been used in the history of painting for centuries, where surfaces, falling like side-screens, limit the sight for the viewer, directing the glance into the core of the picture. Here Burman has placed farmhouses into the role of the side-screens, which simultaneously seem to close the yard rather than opening it. But of the greatest importance seems to be the mood: a wintry still-life that has been rendered by all-embracing snow, making the work at the same time gentle and peaceful.