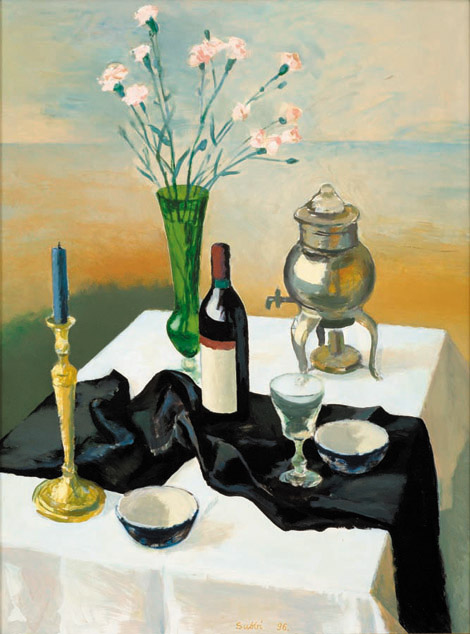 In the present auction choice works of three artists have been joined in the section “classics of the modern art”. Different artists, different meanings. When Helga Jõerüüt is telling us a story of an artist, who after having changed the profession still continues to deal with art and is able to find her way between different trends, then Olev Subbi is a painter par excellence – painting is his real thing. Valve Janov in her turn is an artist, who while having concentrated on painting, does not get tired of looking for the possibilities to renew it. But the fates of Subbi and Janov are also characteristic to the 20.century Estonia. Subbi was sent to exile and he received the possibility to study art only after eight years. Valve Janov belonged to the so-called Sooster group, where she together with other Tartu artists strove for art that could hardly have been called the official style.The status of Olev Subbi has been totally different from that of Jõerüüt and Janov. After his return to Estonia he quickly became an artist, whose every work was an event. Each painting Subbi accomplished was meaningful in art historical sense and worth recording. By today Subbi has remained in the center of the local art world for more than four decades. His works are not too numerous, as already state collections both in Estonia and abroad own more than a third of his creation. Subbi’s “CS 85” is a rare example among the artist’s paintings, introducing the small series of his new still-lives. Being a person respecting traditions, Subbi has concentrated from the beginning of his creative period among others also on still-lives, which were to a quite large extent classical ones. But “CS 85” brings traditional elements to a room that has been left empty in a surrealistic manner. Instead of a copper bowl and an orange is a wine bottle, candlestick and vase. Still the main values of Subbi’s creation have not disappeared anywhere. As a strong theoretician, Subbi handles colours with extraordinary awareness and unfeigned sensitivity. The artist himself has said that the painting must stand up to him, it must not let the artist accomplish his initial idea. So here is also hidden under the apparent control a subtle hunch of inspiration and the inability of controlling. But when Jõerüüt is not striving to achieve a grand result, when Janov concentrates on testing, then Subbi is always ready. Amazing sense of colours, exact room plan, multi-referential layers and the meaning of the creation of Subbi of the last decades gives the painting the value that is difficult to repeat.