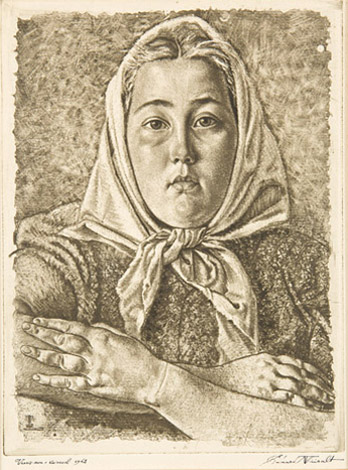 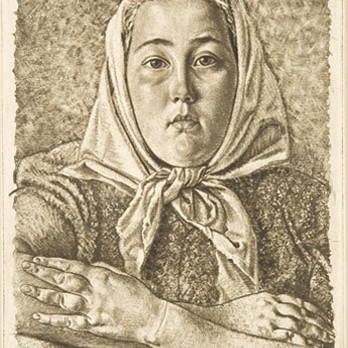 At the end of the 1930ies Wiiralt lived for five years in Estonia, still continuously thinking of Paris, as it had been for him a forced return home. He keeps his diary in French (!) and sees himself in his dreams still engraving plates in one of the local bars. Still several of his works of the period prove, how well he felt his homeland’s fear for losing its freedom and how deeply he sympathized with it, evaluating very highly among others the national romantic creation of Kristjan Raud. “Eesti neiu” is a work with very many different variants (for instance later the girl’s eyes have been made bigger). Model of the work was a person called Ada Sulling, but there was a rumour that Wiiralt deliberately gave her slightly chubbier lines in order to make her look like Hjalmar Mäe, the head of the current self-government. Still, we are rather dealing with the search for a national type. “The thought that in such kind of doubtless simplicity lies the secret of vitality, of remaining alive, had to occur to Wiiralt at the time the fight for existence became especially elementary,” wrote Mai Levin.