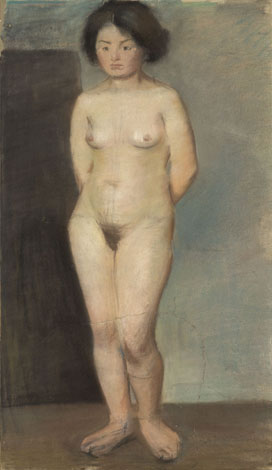 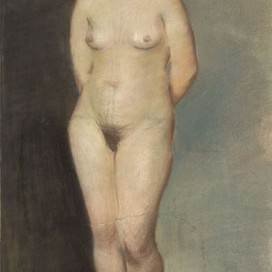 Aarne Miikmaa is an artist, whose fate was similar to that of Andrus Johani. He reached his creational peak at mid-1930ies, but was never able to use all of his powers, as he passed away so unexpectedly, because of what also the number of his works remained quite small. Miikmaa, having become Ants Laikmaa’s favourite student at his studio school and having been called “Laikmaa’s step son”, studied already during the 1930ies in “Pallas”, as he had already grown out from Laikmaa’s teaching. At the university his level was regarded to be so high that he was allowed to skip lower levels and take up nudes that also suited Miikmaa’s development as an artist. In “Seisev naisakt” that he accomplished in his favourite technique, Miikmaa is impetuous, loving the large format, but at the same time also laconic and exact. Especial attention has been paid to the nude’s careless posture and look and taking of the effect of the background, but also to bringing out of the subtle form nuances. Laikmaa could be proud of his step son.