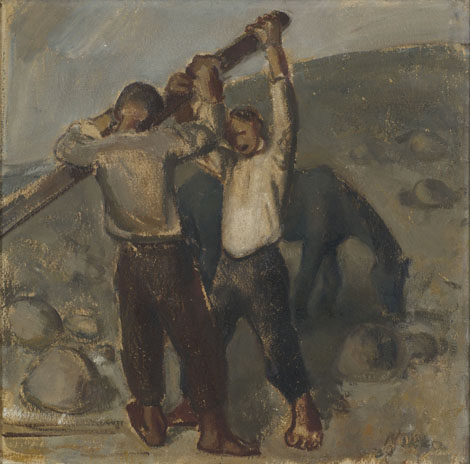 There are few examples left of the creation of Lepo Mikko of the 1930ies. From one side the number of the works from this period is small, as Mikko graduated from “Pallas” only at the end of the same decade. From another side it is difficult to detect Mikko of that period from the later creation of the 1960ies. The artists’ changes in his handwriting were remarkable, paying for instance more attention to the diversity of the composition or the depiction of progress. “Kivikangutajad” in its turn concentrates on an agrarian motif, the archaic nature of which has been emphasized in a special manner: the stone is not being prized by a modern agricultural machine, but the peasants do it themselves. The main emphasis is directed towards the figures, Mikko covers with colours large surfaces, but does not create sharp contrasts, instead he has soft transmissions.
The work is reproduced in journal “Viisnurk” (1940, no 2).