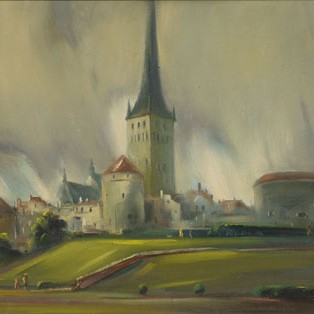 Julius Gentalen left Estonia during the World War II, but he continued as an artist later in refugee camps, creating for instance furore in the media with his huge mural paintings. Later, while living in the USA, Gentalen found himself a secure job, but continued painting. Among other pieces he accomplished several cityscapes of Old Tallinn that were exact despite the fact that they were painted years after the artist’s flight – and exactness applied both to the architectural milieu and the atmosphere. It is thought that while painting, Gentalen used the photos he had taken along with him, but these photos were not only taken of the city, but also of the artist’s old (and perished) paintings. So the depicted warmth is doubled: in addition to longing for the homeland and claimless love towards it there is also the attempt to grasp his personal vanished creation.