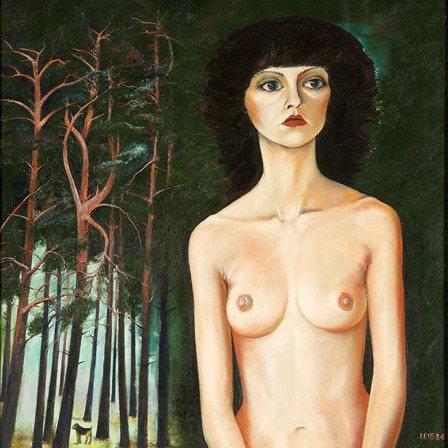 The pop-style colours and floral motifs of Malle Leis have existed in the Estonian art already for decades. Leis, who was once regarded one of the first pop-artists, has continued to depict joyful natural motifs, adding also portraits and nudes. In the 1980ies Leis was so highly valued that the majority of her works ended up in different collections abroad, not talking about the local museums. Therefore the early creation of Leis is very rare to find at the present moment. “Raja 11A” is a rare example of the artist’s paintings originating from the 1980ies. The title has come from the location of the artist’s studio at that time, and the forest which could have been seen from the window of that studio has also been depicted in the painting. In the foreground is still a nude, free from false shame, which enchants us with its courage and provocative nature.