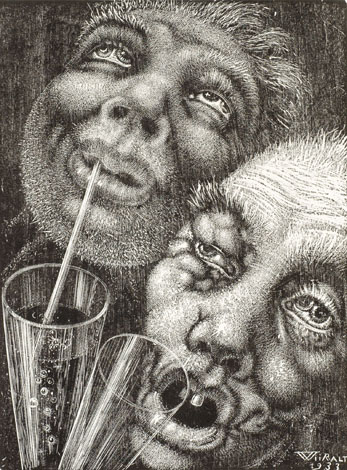 In Wiiralt’s character were joined extreme desolation and at the same time continuous social communication. He has well been described by Hendrik Toompere, the stage director of the play “Põrguvärk” (“Hell Thing”), according to whose words Wiiralt reminds him of a twister, in the core of which is silence and at the edges of which is fracas. “Absindijoojad”, one of the best-known sheets of the artist, is a vivid illustration of that. As a quiet man, Wiiralt still knew what meant intoxication, visions, life becoming a fantasy. He is not ashamed to show the seamy side of life and „Absindijoojad“ is one of these works, which give us the evidence of both frantic fantasy and standing on limitations.