On Wednesday, 8 April at 10am opened an exhibition called „0.43“ by Maarit Murka.

The installation consisting of paintings, videos and supplementary texts was displayed at an exhibition with the same heading at Korjamoo gallery in Helsinki at the end of last year. The exhibition-set that has been adjusted into ArtDepoo’s environment has been enlarged by adding a few new works.

In the current exhibition Maarit Murka, one of the boldest and most productive representatives of the younger generation of Estonian artists, uses physical experiments to put her limits as an artist and as a human being to the test. By manipulating the six senses – vision, hearing, senses of smell and taste, touch and balance – Maarit Murka deals with her own phobias and fears. Through painting experiments Murka tested the ability to create art in a situation where a specific sense was impaired or suppressed. At the same time the artist explored whether and how big a role our perception mechanisms play in the art process. With the manipulation of senses and by physical experiments Murka manifests herself as a contemporary rational artist who can not create like a remnant of the romantic ages, the bohemian artist. 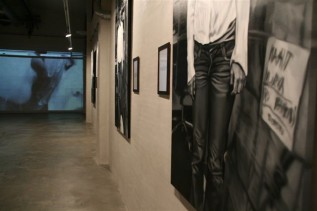 The core of the exhibition is made up of photorealistic self-portraits of frontal composition painted in studio environment, during the completion of which the artist dimmed her different senses. For example by putting to the test her sense of balance creating art in a state of 0,43 per mille drunkenness, and hearing, working in an environment of complete silence not characteristic to Maarit Murka.
The results of the tests – the paintings – are supplemented by videos of the process of the experiment, called “Taste“ and “Taste II“. The videos illustrate the paining “TASTE“, at the creation of which the artist used her sense of taste by licking the fresh oil painting over. With this act Murka tested her health and ability to create – does licking the painting cause damage to its creator’s health or rather improve her abilities. The consumption of paint is not detrimental to the artist’s health but it did destroy the photorealistic painting-style completely.

A display of videos parallel to the exhibition continues on the parallel street at SooSoo Gallery (Soo 4).

The exhibition in ArtDepoo will be open until 2 May 2009.